Is Vivitrol Right for You?

Why it may be time for Vivitrol.

You never expected to become addicted, and recovery can be hard. But there is a non-addictive medication that may help.

Stop the cravings and significantly reduce the risk of relapse!

Benefits of Opioid-dependent and Alcohol-dependent patients participating in counseling plus VIVITROL:

You deserve a shot at meaningful, lasting sobriety. Call today to learn more

Studies have shown that opioid-dependent patients who received counseling and Vivitrol had significantly more days of complete abstinence, stayed in treatment longer, reported less craving, and were less likely to relapse to physical dependence.

(naltrexone for extended-release injectable suspension)Vivitrol is a non-addictive, non-narcotic medication.

It does not react aversely with alcohol. It reduces cravings, helps achieve abstinence and blunts the affects of alcohol euphoria. Vivitrol also blocks the effects of opiates and reduces the cravings for opiates.

Vivitrol appears to break the self destructive, vicious cycle in alcoholics whereby one drink leads to multiple. When comparing abstinence rates at 6 months as a measure of success, studies have shown that Vivitrol works about 3 times better than counseling alone.

Vivitrol is indicated for opioid dependence which is generally viewed as a more intractable disease than alcoholism. In a study which included counseling, (like what is provided by Dr. Simon), 901% of those on Vivitrol were abstinent for 19 weeks compared to 35% of those on placebo.

In addition to improving compliance, the drug has an anti-craving effect and what the FDA called an anti-relapse effect. Patients who “slipped” (which is defined as a brief relapse) were better able to get back to abstinence with Vivitrol. 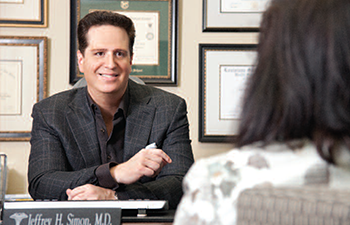 Each individual has different needs in achieving a meaningful recovery. Dr. Simon recognizes these needs and treats the whole person, not just part of the person.

He takes an invested interest in your overall individual well-being; whether it be emotional, social, medical, psychological, or physical. He is committed to you and your recovery.